" If Allopathy doesn't have answer to your disease, it doesn't mean that you have no hope left !!! Smile with Acupuncture " :)﻿

As many as 5 crore people in India suffer from depression, according to a report by WHO in June 2018.

Additionally, India is one of the countries with the highest rate of depression, schizophrenia and bipolar disorder in the world according WHO data in 2016. A Phenomenon like suicide doesn't exist in isolation and is often accompanied and triggered by mental disorders of this kind.

If these numbers weren't dismal enough, there's more of the people suffering with depression globally, only half of them seek treatment.
Average suicide rate in India is 10.9 for every lakh of population and majority of them are below 44 years of age.

Half of the mental health conditions start by the age of 14 yrs and most of the cases are undetected and untreated.
People don't want to talk about it as they do for other diseases out of social stigma...but does avoiding it cures it??? Definitely not!

Do you know depression can also lead to death if it gets worst!

After taking the proper history of the patient and diagnosing the TCM pattern, treatment is started and the results are simply amazing!
Patient usually get to see the changes from as early as 7 sittings and the duration of treatment depends upon the severity and chronicity of the depression.

In present scenario, there are so many patients visiting to us on daily basis from all over the world for infertility.
Many of them have already tried multiple IOI's and IVF's but unfortunately got no results.
When we look into their lab investigations thoroughly, we found most of them have infertility of unknown cause i.e there is no blockage in fallopian tubes, eggs are properly formed, periods are regular, uterine lining is normal but still they are not able to conceive.

Reasons for infertility in young and middle aged women:

Acupuncture is a big positive answer for all such disappointed patients!

How acupuncture helps in restoring fertility:

Some of our patients have responded in as early as 6 sittings and sometimes it takes longer as well depending upon severity of the condition.

For better overview you can directly have a look on our patients experiences shared in Google reviews section. Link has been shared below. 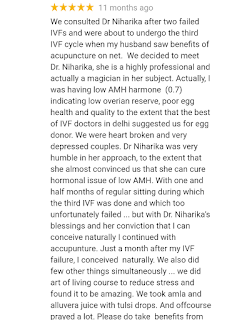 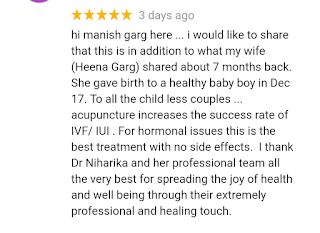 CONSTIPATION....Are you the one affected by it?Is your constipation chronic?Have you tried everything till now?Tired of medicines and their side effects?

Constipation means that your bowel movements are difficult or happen less than normal.Almost everyone has it at some point in life and we know that it is really very disturbing!

Patient doesn't feel like eating properly, feels bloated most of the times and many a times abdominal pains also accompany.

Now..no more sufferings...no need of medicines..just cure your constipation from root with acupuncture !!!
Now I am discussing my recent case of chronic constipation here...
Patient named X of age 37 came to us with the history of chronic constipation since more than 10 years.She was very frustrated as she had tried everything till now.
Abdominal bloating, acidity and naval displacement was present.In her language her tummy was not able to relax at all.
Thirst was low,sleep was not sound, cravings for sweets were present, temperament was anxious and impulsive.Stamina was poor, breathlessness was present on anxiety.Tongue was having thick white yellow coating.
After 12 sittings of acupuncture she got rid of her chronic constipation with overall improvement in her health too...Tongue became normal!
Patient's feedback after treatment...
Hi,
I had been suffering from severe constipation and gastric problem for quite a long time.I used to feel heaviness and bloating after having every meal. I used to avoid eating fried, rajma, channe, naan. Then I opted to go with acupuncture.After 2 sittings I started feeling lighter.Really a blessing for patients who have been under medication for long time.
After one course I have become perfectly alright.Now I can relish almost everything.I don't have to think before eating.
My regards and thanks to Dr.Niharika mam for contributing so much to the society.Thanks!One more thing I want to add, my skin has also improved.I can see glow on my face. 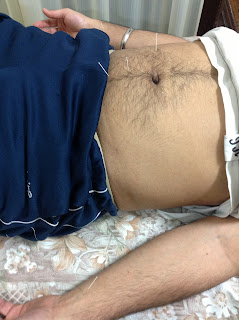 Who can utilize traditional acupuncture?

Many people use acupuncture for help with specific symptoms or conditions. Others choose acupuncture as a preventive measure to strengthen their constitution or because they just feel generally unwell. Acupuncture is considered suitable for all ages including babies, children and the elderly.

Is it safe for babies, children and teenagers?

How many sessions will I need?

That depends on your individual condition. At first your acupuncturist will normally ask to see you once or twice a week. You may start to feel benefits after the first or second treatment although long-standing and chronic conditions usually need more time to improve. Once your health has stabilised you may need top-up treatments every few weeks. Traditional acupuncture is also very effective when used as preventive healthcare and many people like to go for a 'retuning' session at the change of each season throughout the year

Most people find acupuncture to be very relaxing. Patients often describe the needle sensation as a tingling or dull ache. This is one of the signs the body's qi, or vital energy, has been stimulated.

I'm scared of needles - can I still have acupuncture?

Yes. Certain styles like Japanese acupuncture use needles that do not break the skin or are inserted extremely lightly. Acupuncture needles are very much finer than the needles used for injections and blood tests. You may not even feel them penetrate the skin and once in place they are hardly noticeable.

How will I feel after a treatment?

You are likely to feel relaxed and calm. If the treatment has been particularly strong you may feel tired or drowsy and it is worth bearing this in mind if you plan to drive or use any other machinery soon afterwards.

What is the cost of treatment?

There is no fixed fee as practitioners' overheads vary. If you contact a few acupuncturists in your area you should discover an approximate fee level amongst them.

Can it treat other conditions besides pain?

Yes,it can treat large number of chronic disorders which have no treatment available in other therapies.Visit our previous blog on WHO list of conditions treatable with acupuncture.

How quickly does it treat any ailment?

It depends completely on chronicity and severity of the disorder.Children and those with good general vitality respond faster as compared to older people and those with depleted qi may expect slower results.

COMPLETE SOLUTION FOR PCOD IN GIRLS!!!

PCOD or Polycystic Ovarian Disorder is one of the most common disorder running in this generation girls.Every 1 in 10 girls are affected resulting in many hormonal imbalances in their body.

Apart from this their menstrual cycles are not regular,weight gain ,mood fluctuations are also present.Girls with PCOD have difficulty in conceiving too!!!

Now I am discussing a case of PCOD that came to our clinic and improved drastically!

Patient named X of age 18 came to our clinic with history of very irregular menstrual cycle since 7 yrs.
Apart from this acne were present since 2yrs.Hirusitism was also there.
Mood fluctuations were present along with weight gain.

She went through various investigations at hormonal and structural level so confirmed case of PCOD.
Acupuncture treatment improved her hormonal imbalances drastically!!! 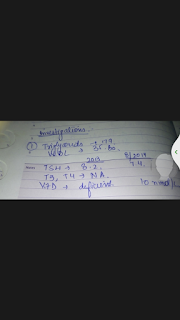 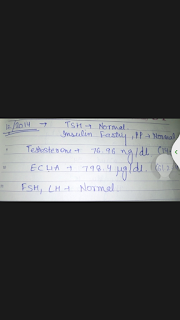 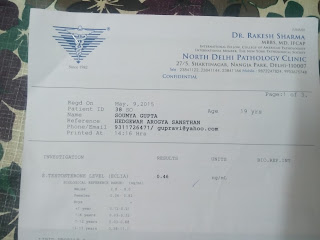 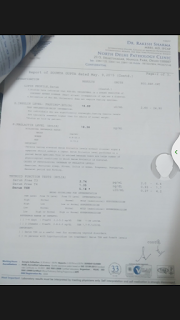 We started her treatment under acupuncture and got excellent results!First of all her menstrual cycle became regular then her acne issue got better with reduction in some inches from abdomen too!!!! 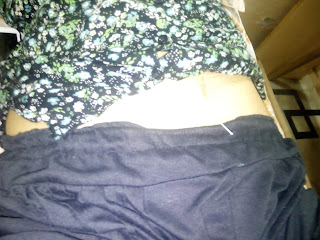 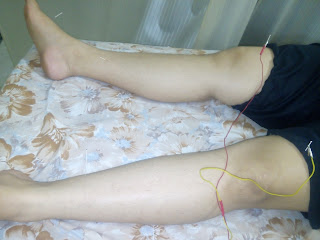 JUST TWO ACUPOINTS ON THE EAR & THE SLEEP DISORDER GONE!!!

The magic of acupuncture continues...

Yes!!Just two acupoints and everything fell in place...:)

Patient named X of age 60 female came to our clinic with the chief complaint of difficulty in falling asleep at night till 2 to 3 a.m since 6 months.

Difficulty in falling asleep at night kept her restless during day.. Apart from this she also reported one strange feeling that she was going through...She reported a feeling of insect moving through her body when there is no such insect..Huh..what's that!!How is this possible..but yeah that's true as it was there.

She came to us and we gave two acupoints on ear and sent her and guess what....she called up next day with the happiness in her voice saying...hey doctor I slept very nicely on time after  so long..and I have no such strange feeling of insect moving through my body anymore...thanks a lot!!!

The best part is everything fell in place so easily without any internal intake of medicines or side effects...
NATURALLY AND EFFICIENTLY!!!

My love for acupuncture deepens after seeing such results!!


16 yrs.old case of rheumatoid arthritis came to our clinic 2 yrs. back with the history of moving pains in her joints involving inter
phalanges,wrist,shoulder,elbow and back.

Since 16 yrs. patient has taken all types of treatments under ayurveda,allopathy,homeopathy,yoga but was still under immense pain!
Since 4yrs before she came to us..she was taking steroids daily (6mg orally daily with weekly injections) after her rheumatoid arthritis got diagnosed!!!Due to which generalised swelling was present in her whole body and her weight was 81 kgs... 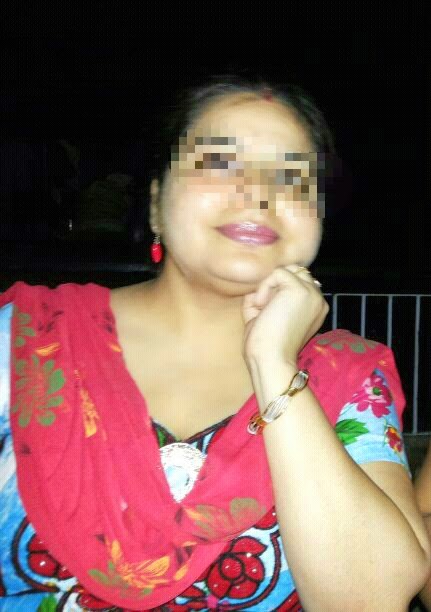 On going through various lab investigations,her...
ESR was raised,C-Reactive proteins,Anti-CCP,RA factor were raised too.Medicines affected her liver too due to which SGOT,SGPT were also not normal.

General examination indicated her sleep was disturbed,Hair fall was present,excessive anger was present too.

We started her treatment under acupuncture and the results were really fantastic!!!

We gave her treatment under acupuncture for 7 courses and the results were...

Basically,overall wellbeing of patient was restored at both physical and emotional level!
Now its been a year after treatment and she is doing very well now!!!
Thanks to acupuncture for blossoming many such lives :)
Posted by Unknown at 23:47 No comments:

Contact Form: We would love to answer your Queries and respond to your Appointment.